Recoil AEG’s – What’s the fuss about? 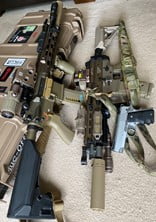 So sometime ago, in the dim and distant past, I wrote an article about recoil airsoft guns and whether they were fad or here to stay. Since then Marui have continued to release recoil after recoil gun in the Next Gen Recoil Shock (NGRS) series and I believe with each new iteration they have built on a very solid foundation and have a customer base of extremely loyal fans who borderline worship these guns. (I have to confess to having a slight obsession with them myself!)

However Marui are not the only people in the airsoft industry who manufacture recoil guns; KWA and Bolt both produce their own range and there are others who have some form of blowback or faux recoil or even aftermarket kits to convert a standard AEG into a recoil AEG.

In fact the KWA guns are designed by an ex Marui engineer who was instrumental in the design of the NGRS series! You could even go so far as to argue that in the kinetic feedback system (KFS) employed by KWA in their versions is an improvement over the Marui mechanism – and in my opinion it is; the KWA Electric Recoil Gun or ERG for short is considerably easier to work on from a teching point of view and from this writers perspective, it is more robust also both in regards to the durability of the externals and the compatibility with most version 2 gearbox parts – I must point out that some parts are proprietary but considerably less than the Marui NGRS guns. 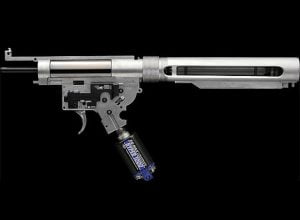 The ERG’s will also accept standard AEG mags without modification or the need of an adaptor unlike the NGRS ones thus bringing the cost of ownership down if you already have mags that would work. There is also the upfront cost of the guns themselves. Marui in this regard are the gold standard and their pricing reflects that with them going from £350 all the way up to over £700. I’m not even going to get into the costs of “upgrades” some owners are willing to spend on their NGRS guns BEFORE they have even got them!!

In contrast the KWA ERG RM4 can be had for considerably less. The PTS versions of the ERG are slightly more expensive but carry real steel licensed trademarks such as the very first one – the Magpul PTS ERG and the most recent being the Centurion Arms C4-10 – a very fine example of airsoft and licensing working together to produce a fantastic replica and one I was lucky enough to get before release in the UK and which stayed in my collection until very recently. 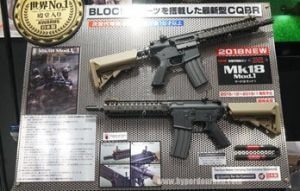 So why recoil? Why is this something that in airsoft we are so keen to replicate especially when real steel shooters do everything they can to mitigate the felt recoil of a firearm using muzzle brakes, stronger buffer springs; recoil pads on stocks etc etc. In fact in the real world millions of pounds have been spent by various companies to bring recoil down as low as possible in the quest for ever increasing accuracy as factory coil moves your point of aim and therefore your point of impact when shooting. Admittedly with airsoft guns any felt recoil is going to be considerably less than you would ever experience when firing a real firearm especially a full-bore centerfire gun such as an AR or AK. The short answer to that can be summed up in one word – realism.

Now obviously there is a lot more to it than just the realism that we are trying to replicate and the recoil these guns offer is just a small part of what makes them so attractive to the modern airsofters. For example most of these guns will have last round cut off. So what does that actually mean? It means that once you have expended however many BB’s you loaded into your magazine, and typically recoil gun mags hold between 30 and 120 rounds, the gun will stop firing until a fresh magazine is inserted and, on the AR platform, the bolt release button is pressed thus making the gun live again. 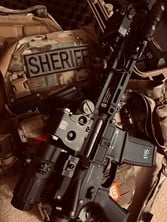 It’s this realism that keeps me coming back time and time again to the recoil guns in fact all of my AEGs are recoil whether that be Marui or KWA. It’s also what makes these guns so popular with Milsim players and also guys who want to use airsoft as a training tool to aid with their real steel shooting. I can honestly say that even with the limited capacity magazines and the fact that if you don’t keep an eye on what you’ve fired you can find yourself pulling the trigger and nothing happening!

It’s a little disconcerting the first few times but you soon get very adept at rapid mag changes – again; it just adds to the immersion and sense of playing with a replica that feels slightly less toy like.

If you want to take your shooting to the next level and stay with electric Airsoft guns then you should seriously consider looking at the various recoil models available on the market today; I promise you will not regret investing in one of these platforms.

Check out the website for the various KWA and Tokyo Marui recoil guns. In the next blog post I will be looking at an example of each in more depth. Stay safe folks!