Airsoft is the name giving to a type of simulated combat similar to paintball. Using compressed air (air guns) guns that fire plastic ball bearings, players on opposing sides battle it out in war scenarios at registered airsoft skirmish sites generally located out in the countryside or in old buildings that have been specifically adapted and insured for the purpose.

A handy list of sites in the UK can be found here: www.airsoftmap.net

Airsoft is an action game that carries out military simulations, but instead of using blank firing or live weapons we use Airsoft guns as a workable alternative. Scenarios are as varied as the participants imagination and the real life situations they draw information from. Skirmishes (the simple name for simulations) vary enormously from informal gatherings of friends on private land to large multiplayer games were a written scenario is followed, many are also re-enactments of real time events where participants play and take part, using scenarios such as Black Hawk Down.

The core of Airsoft is based around having an ‘experience’. Players rely on the ‘suspension of disbelief’ to supply them with that experience. Realism is a vital part of that and using authentic and realistic equipment is as important as the scenarios being used. This includes the replica weapons as they are the key props players use to set the scene and roleplay the situations.

Said to have its origins in Asia, most likely in Japan, it gained popularity due to the strict gun control laws imposed after the second world war. Due to its Asian origins much of the advanced Airsoft equipment comes from the Far East. Airsoft has been rising in popularity over the years and has spread across much of Europe, America and the UK.

There are a few different types of Airsoft game: Military Simulation and Close Quarter Skirmishes,

Close quarters battle (CQB or Skirmishing), is the most widely used style of Airsoft combat. Typically taking place in warehouse, abandonded building or in woodlands or farmland/farmyard. Specific Airsoft equipment, such as high capacity magazines and other non military equipment is commonly used along with combat fatigues or military uniform. Weapons used vary in type such as sniper rifles as well as Airsoft assault rifles and vary in cost from start up level to high end.

Military Simulation involves role-playing military re-enactments and can last several days. Each team has several tasks to carry out or a missions to achieve, including supplying team members with rations and ammo and other equipment necessary for the continuance of the mission. Two way communication can be used to maintain co-ordination of position and manpower. Throughout the mission, which can last several days, players remain in play(even overnight) but a safe zone is always set up with medical equipment on standby should it be required.

The main thing about Airsoft is the freedom involved. Safety equipment is minimal with the only mandatory safety equipment being eye protection, such as impact protection goggles or shooting glasses, and face protection such as a balaclava although emphasis on the former due to potential blindness.

Airsoft is basically an alternative to paintball however it is an alternative that is far more realistic! Checkout Airsoft Rulez! (Basic Rules of Airsoft) for a light hearted look at some common site rules:

The obvious difference is that with airsoft you are missing one thing .. the paint. This then begs the question, how do you know when you have hit someone or are in fact being hit. Well airsoft is based purely on honesty, if you get shot chances are 99.9% of the time you will feel or hear it hit you, at this point you are to raise you hand into the air and clearly shout HIT! 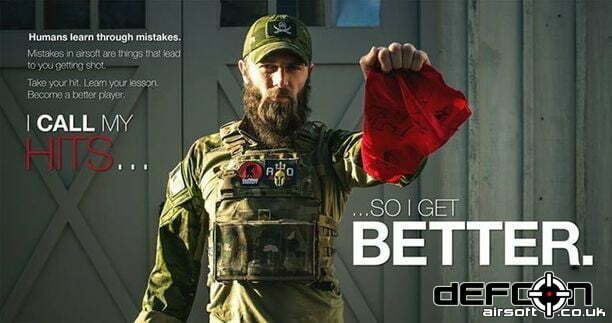 Airsofters see absolutely no reason for cheating as there is not one game in which you are out for more than 5 minutes and often have an instant re-generation and it is for this reason that cheaters, when found out and are often asked to leave as it only ruins it for everyone else.

The Popularity of Airsoft in the UK

Below are several reasons as to why airsoft is now becoming so popular:

So basically to sum up…

If you enjoy gun related sports, you may be looking for a new hobby or you may play paintball … Give Airsoft a try, we guarantee you will not be disappointed!

Check out our Airsoft Infographic here for more information.