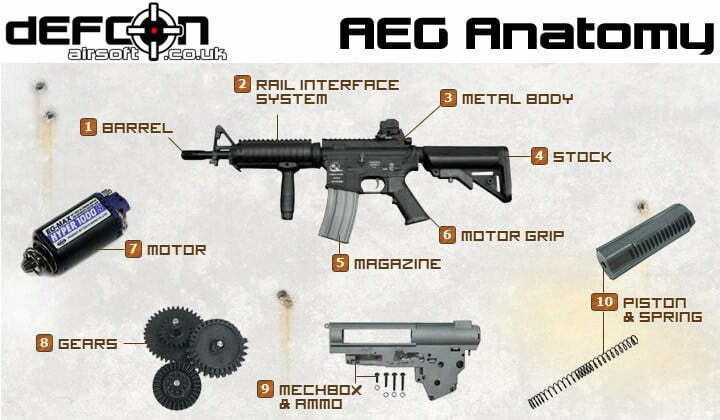 How does an AEG airsoft electric gun work?

When the shooter pulls the trigger, a switch is enabled and metal contacts close which completes the circuit between motor and battery. This causes the motor to start rotating, engaging the bevel equipment which causes the bevel gear to engage.

To stop the gear spinning back around if the gun doesnt fully cycle, an anti reverse latch engages which rachets and locks the bevel gear in place.

The gear has a dual function – there is a small pin as seen on the picture which engages at the 12 o’clock position to pull back the tappet plate, which then draws back the air nozzle. This permits a pellet to feed upwards (using a spring in the magazine) into the hop-up unit. When this gear pin disengages the tappet plate is returned to its forward position, with the air nozzle moving ahead, chambering pellet in the process.

At the same time as all this is happening, the piston is pulled back by the teeth of the same gear. At the point when the gear runs out of teeth the piston launches forwards powerfully powered by the large spring behind it. This movement generates a significant air pressure through the air nozzle to launch the pellet. Simples!

Metal bodies and realistic looking casings make these look like exact replicas to real automatic weapons. For this reason, all airsoft guns can easily be mistaken for the real thing, so need to be kept out of public view at all times unless you fancy a visit from an armed response unit.

Nowadays, the goal of airsoft manufacturers is to make the AEG airsoft guns as realistic as possible. People like to use these because they can get off round after round without having to stop to pump their gun. Also, when playing war games, the more realistic, the better.

The MPEGs are just a little under regular AEGs. They copy the form and function, but have a little less power. Think of them as knock-offs of the regular AEGs. They perform just fine, however. Mini Electric Guns are small guns that perform only in automatic mode. The last is the AEPs. These are pistols that fully function in the automatic mode, instead of operating on gas.

So when you are ready to purchase your next airsoft gun, be sure to check out the automatic electric guns. If you haven’t tried them before, you’ll love them.