You all understand the basic principle of Airsoft. Two opposing forces in the field, you shoot the man on the other team, he falls down, Bob’s your uncle. Simple? Well… yes.

So, what exactly are tactics? 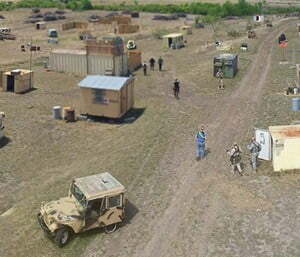 Airsoft is like a ‘soft’ war, where no one gets seriously hurt and everyone gets to go home. In real war, we have devised tactics in order to bring up our chances of taking out the enemy. The same can be applied to airsoft, if you want to win a fight, use tactics.

Tactics are basically a set of manuevres or actions which bring about the defeat of an armed opposing force. Not all tactics can be applied to airsoft, but small unit tactics are a good way of increasing your chances of getting that all-important win.

I love winning! Tell me more…

Okay, so lets set the scene. Lets say we have a skirmish field, which is contested by two opposing forces. Lets say they’re all armed with similar weapons, with similar magazine capacity, and have a similar shooting ability. So theres a 50% chance of your team beating the enemy.

Thats if you just try to outshoot the enemy. However, if you employ basic infantry tactics, you can increase your chances of destroying the enemy. While its always helpful to brush up on your basic marksmanship techniques and refine skills such as getting your shooting stance correct, a basic sound knowledge of assault tactics can really give you the edge.

Lets say, instead, that you have split your team into two sections: Red section and Blue section.

Splitting your team up could be dangerous, but it could ensure the enemy’s destruction, so it is a risk worth taking.

Now, if Blue section were to lay down rapid fire on the enemy positions (or suppressing fire for those of you who like to play as the Americans) then this would allow Red section more freedom to move on the battlefield. They can now exploit an enemy weakness. 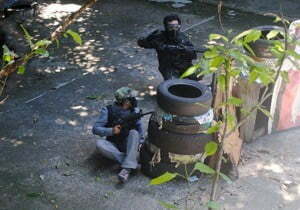 A common weakness in the enemy defence is their flanks. Right, left, or rear if you can get all the way around them. Red section has now broken off from the main formation and, in this example, has moved around the enemy’s left flank. They should now have some nice open shots on the enemy’s exposed side.

Now if Red were to open fire, they could take out the enemy’s left flank. They could also use grenades to clear a hole in thier line.

This is where it really kicks off. Red section should now press forwards into the enemy’s side. Once they see this happening, Blue section should begin advancing on the enemy by firing, moving, stopping and firing again.

This will press your enemy into a corner. He will have to engage two groups at once, meaning he cannot bring enough airsoft guns to bear. He will panic, perhaps think that he is engaging a larger force, and ultimately, will lose.

Thats all very well and good, but what if he is sitting in a fortification?

Entrenched enemies require a similar, if not the same, tactic. Lets say you have a squad of 5. One is carrying an MG (M249 or similar) and another has some sort of bolt action sniper rifle. Everyone else has some form of AEG, M4 or AK or similar. 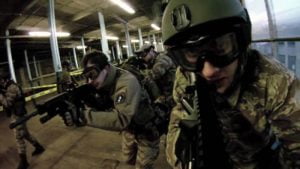 The enemy is entrenched in a small building with 4 AEGs. The only entrance to thier position is a small opening at the base of the building.

There are three approaches you can take. The first is to try and outshoot your enemy. You outnumber him, but he has better cover.

The second is to break your squad and send two AEGs to flank. If they come up on the side of the building, they can try and get a different angle on the targets or throw in a grenade.

Finally, you can try an all-out assault. It may seem suicidal, but if you take the risk you could gain the reward.

First, you lay down a base of fire on your target. Keep them pinned so they cannot pop up for long enough to get an accurate shot. For this, use the MG, an AEG and the sniper. If they cannot get a good look, they wont even see your assault team coming.

The assault team moves forward, occasionally firing in the direction of the enemy, right into the building. Its always a good idea to send people with short weapons, MP5s, M4s, L85s, etc, because they are more manueverable. The assault team can use grenades or simply outshoot the enemy at close range.

Right, so what would you say is the best tactic?

That’s simple. Flanking. It works 9 times out of 10 and usually ensures the destruction of your enemy. As long as your flanking teams arn’t reckless and dont sound like a herd of elephants crashing through the woods, then that bothersome bunch of bad guys isnt going to be a problem! 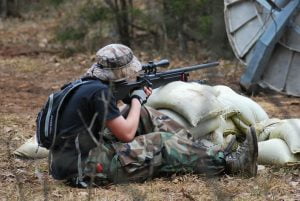 We were taught this recently at our site and it worked extremely well. So, to begin with the basics: First, you would have to split up the team into different sections i.e. Alpha, Bravo and support and a commander (usually with support). The commander would get a focal point, the thing that sticks out the most, for example a farm house. He would say something along the lines of Farmhouse 12 o’clock and beyond. If you imagine a big clock, the farm house would be the middle, 12 would be beyond and 6 in front.

Now, if an enemy is sighted, and the commander wants someone to engage them, they would say something along these lines: Alpha (the section the commander is talking to) 7 o’clock of farmhouse (where the enemy is with respect to the focal point) 100 meters (distance from commander, or whoever is shouting the order) rifleman (type of enemy) rapid fire (the type of fire you lay down, this may include ‘fire’, which is slow single shot, ‘rapid fire’, which is rapid single shot and automatic fire etc…) Alpha would then engage the enemy. When attacking a position these tactics were used: Alpha, Bravo and Support were structured like this:

Alpha on the left flank, Support in the middle and Bravo on the right flank. (This would all be done after the above has been stated.)

The commander would shout something like “ALPHA! MOVE”. Alpha would then advance about 10 paces (might be defined in the engagement) while Bravo and Support lay down constant fire. Once Alpha is in position the commander would shout “BRAVO! MOVE!” again using the above rules. This should keep the enemies heads down, a grenadier would then be used to run forward and grenade them.

The Move commands should be shouted loudly and clearly, as all commands should be, but especially loudly. It’s fairly scary hearing a lot of shouting coming towards you, especially if its moving, because they will probably be moving towards you. General shouting would be a good addition when advancing: add more fear to the enemy. It is important that there is a constant stream of fire towards the enemy postition, more too keep their heads down so your team can advance.

A lot of the time, the obvious way is the best way, especially using the tactics above…. A fairly open space with cover, and have the enemy position in front of you. 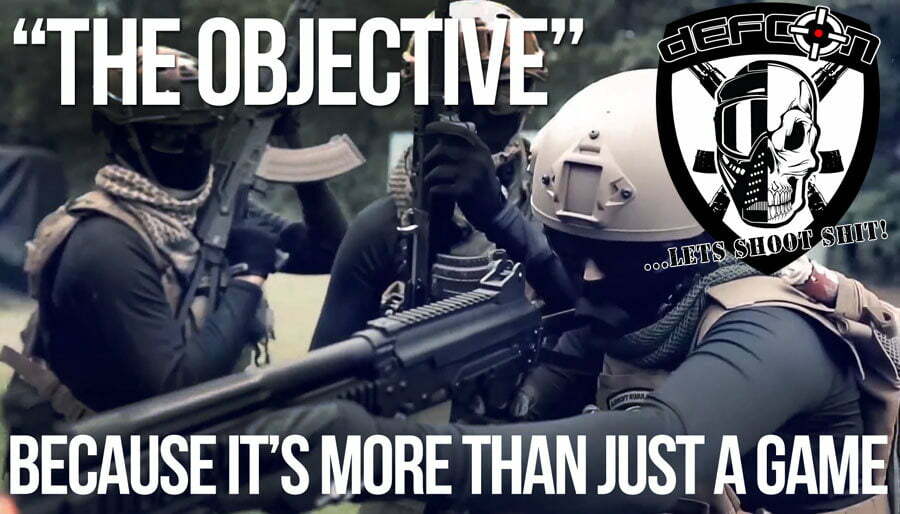 We’re still open online and delivering, but have temporarily closed our showroom until further notice. Free shipping is available on orders over £50 using code ‘FREESHIP‘