This is Marui’s new not new release. Not new because they released the tan FNX some time ago but in line with their usual MO they have now released it in black along with mags with black bumpers instead of tan.

First the box! Following the trend of recent Tokyo Marui releases the boxes are pretty stylish now and this one is no exception. Oh, it’s also a bloody big box too giving you an indication of the size of the hand cannon contained within. Inside is the cut out for the pistol; one for the magazine and then the interchangeable back straps are on the right side. 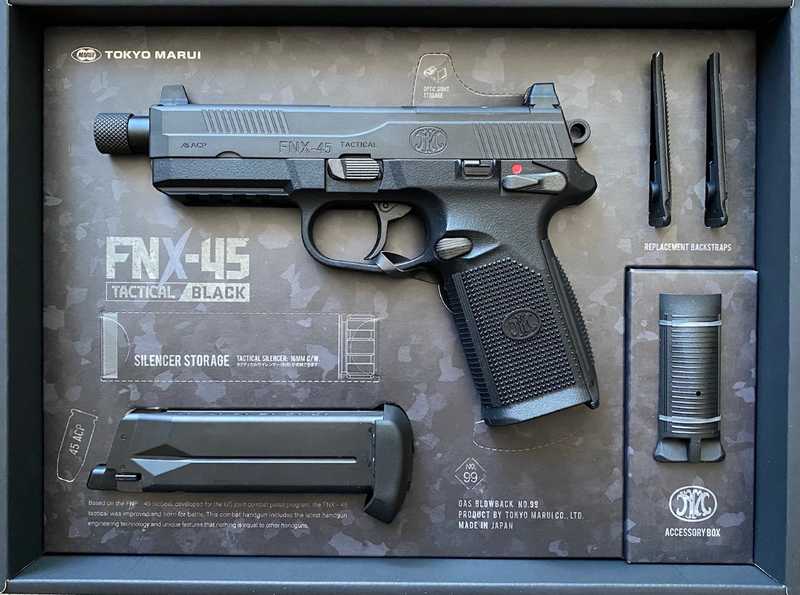 The back straps come in small and medium and there are two of each. One features knurling like the pistol grip and the other has horizontal lines across it. There is of course the little box with a bag of BB’s and a barrel plug. Just out curiosity; has anyone ever used the BB’s that come with guns? contained in a polystyrene insert stuck to the box lids the manual and a few other leaflets and a couple of targets.

The gun itself is entirely polymer as Marui cannot make metal slides for GBB’s as it is restricted by Japanese law but that’s not to say it looks plasticky because it doesn’t. One thing Marui have always done well with their pistols is make them look like their metal counterparts and more than one person asked if it was metal even with it in their own hands at the time! The matt black finish of the slide also contributed to this as it looks very very good.

As I already alluded to this is a BIG gun! I’m much more used to small handgun such as a G19 or H&K USPc so there was a bit of an adjustment period to this. I had to fit the small back strap to make it comfy to hold but with this done and the almost vertical angle of the grip it turned out to be perfectly comfortable to wield and I was able to reach all of the controls with minimal movement of my shooting hand. 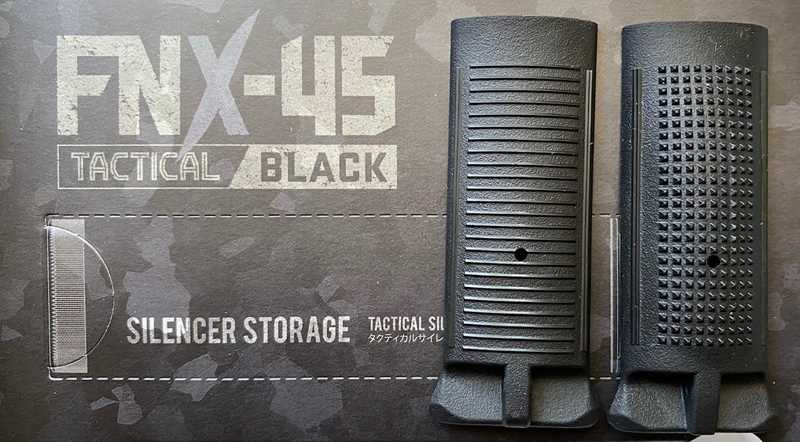 The slide is chunky and there is a lot of material in it so I feel more than confident running it on propane/green gas. It also has quite long metal rails giving it extra strength and it is on these rails that the slide lock engages thus preventing the plastic being damaged. Whilst there are some markings on the slide they are not 100% accurate to the real one but I’m guessing only the real die hard trademark fans will worry about it and I’d be willing to wager that someone will bring out a metal slide kit for it in due course, which will no doubt address that particular concern.

The serrations on the slides sides are aggressive enough to grip easily even with gloves on and they are front and back. On the top of the slide is a set of replica Trijicon high profile suppressor iron sights, which are actually very easy to acquire when aiming. Theres just a few more salient points to cover off regarding the slide before we move on. Firstly the blowback unit has the new oval shape profile driven mainly by the second point I wanted to mention and that is the removable panel sitting in front of the rear sight. If you take this off you will see two tetris block shaped nubs. These are for mounting the Marui Prodot scope – their version of the RMR using the extra screws provided with the gun. I sat looking at this part of the gun for a good few minutes as I tried to work out how my RMR would fit on there as it had round mounting holes and even though it was blatantly obvious my little mind didn’t want to acknowledge it.

There are a few other options from the optics world including the vector optics frenzy if you don’t want a Marui reddot. The final thing relating to the slide is the hop adjustment. For some reason they have it underneath the hop unit and not in the chamber as per the G19 so any adjustments that need to be made means taking the slide off each time. Luckily once it’s set it doesn’t move easily so it will hopefully only be a once in a while job.

Moving to the barrel, it features a 16mm threaded muzzle capped off with a nice little knurled cap. A cap that I can already imagine will try to make a break for freedom at the first available opportunity and probably while playing at a woodland site too! To this you can thread the optional suppressor, which has a very good finish and once on feels secure enough even after quite a few magazines through the gun. It’s a foam filled can and does actually alter the report of the gun. Down from quite a satisfying bark to a more muffled pop. It would’ve been nice if Marui included it with the gun considering they did so with the HK45 tactical, which is a cheaper gun and they both share the same can rather than charging £40 more for it.

Hows it shoot though? Thats what you really want to know! Well… It shoots very well and with a nice kick in the palm of your hand even when using 144a gas. As you would expect the DA trigger pull is quite heavy not that I think many will use it DA as single action is much lighter but the trigger reset is quite long. It isn’t overly heavy considering its size so it doesn’t become a burden over the course of a long game and as most of the weight is in the magazine it is very well balanced in the hand.

My home “range” is approx 25m and with a fully loaded and gassed up magazine it sent them all out to that distance easily locking the slide back when the last BB left the muzzle and this was before I’d made any adjustments to the hop.  With the hop dialled in and a fresh charge of green gas in the mag off we went again. This time the BB’s easily floated past the 25M mark so having run out of room, I waited to test it again next time I played before games started and within 50m there was a fair chance of hitting your target I reckon it probably went further but I seriously doubt anyone would feel it at that distance. I put it over the chrono and it had an average over ten shots of 248FPS using 0.28g BB’s so well within site limits.

Using it in game was great fun and I managed a couple of kills right on the limits of its range. Dropping the mags out was fun and the big bumper on the bottom of each mag took most of the impact but I wouldn’t be doing it too much on hard floors. The big old bumper on the real gun is actually there to serve a purpose; it’s to aid in aiming when lying prone by making the gun roll back thus bringing the muzzle up. I didn’t test that out when I played but the bumper does make gassing the mags up a little challenging. If your gas can has a short nozzle you may need to get an extension for it (abbey make one if memory serves) another consideration is holstering as it could present an issue as there aren’t many made specifically for the FNX that don’t cost a small fortune or require importing from the US.

I found with a little adjustment my Warrior universal holster worked fine but without the suppressor fitted. If Kydex is your thing then there are a multitude of offerings out there from various specialist suppliers in the UK. This isn’t going to be a gun for everyone but those who are fans of large handguns and the styling then it’s a must have for the collection.