To say that Marui were busy last year would be a bit of an understatement really. Seems they have hardly stopped with new releases throughout the year and they don’t seem to be slowing down either with the announcement of the Saiga GBB shotgun (we all know how much fun the shotguns from Tokyo Marui are!) and the short version of the popular URGI uppered M4.

When the AKM GBBR was announced I wasn’t immediately jumping for joy as there’s many many more guns I’d love to see being made by the Japanese airsoft powerhouse and I’m also not the worlds biggest AK fan. In fact I would go so far as today my distaste for Mr Kalashnikov’s most iconic invention is legendary and yet I found myself strangely drawn to this release. 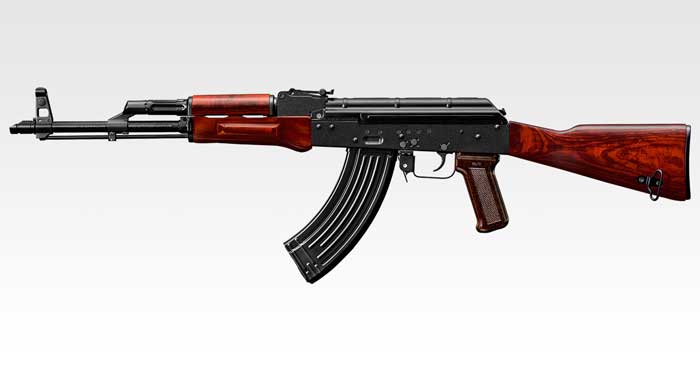 I have owned AKs in the past; many AKs in fact but never a GBBR version of the iconic rifle. The choices prior to Marui stepping into the ring just didn’t appeal to me and I’m a huge Marui fan mainly because their guns just seem to work and their MWS is no exception so my reasoning was the AKM should also work as intended. With the decision made I placed my pre order and waited.

I got a lovely picture text from Ray and within half an hour I was at Defcon Airsofts door ready to pick up my new gun – sadly like a lot of Marui releases they deigned to not produce sufficient mags so I literally got the gun and the included magazine to begin with but it was enough to have a play around with and get some trigger time in with it.

The packaging is up to Marui’s usually high standard and includes a really nice and reasonably authentic canvas gun wrap as part of it. I would recommend relying on that for securing your gun in public and a proper gun bag or case should be used but it’s a nice touch nonetheless. The gun itself has a sufficiently heavy weight to it and feels plenty solid enough in keeping with its real steel roots of being, well, a bit agricultural perhaps. Marui have improved on their plastics and the fake wood is, in my humble opinion, considerably better than previous incarnations as they apply the transfer once the stock is joined thus meaning there’s no seam lines. The pistol grip is Bakelite style and very thin. A departure from the thicker grips I’m used to with my NGRS AEGs for sure but it is comfy and I believe it replicates the original faithfully enough. 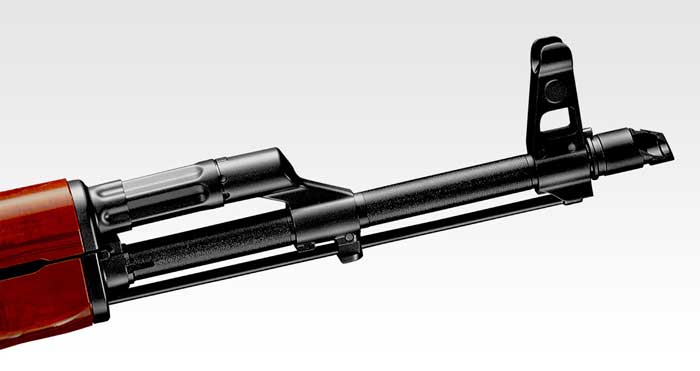 The magazine is a one piece metal affair and so it’s solid and weighty. as it’s an AKM model it is modelled on the 7.62mm round and not the newer smaller 5.45mm used in AK-74’s onwards. Luckily they fit in the pouches I already have which is a huge relief as I didn’t fancy having to splash out on new pouches as well as mags.

The metal work is nicely done and it all looks well finished in a semi gloss black paint that contrasts against the wood effect nicely. In fact; if anything the Japanese quest for high QC has probably resulted in a gun that’s better than a real one would look just rolling of the production line at Ishmaz (I think that’s the right spelling!)

Internally the guts seem to the casual observer to replicate quite well the workings of a real AKM and the bolt looks very good complete with its long gas piston assembly and stripping the gun is the same as the videos I’ve seen on YouTube of the real AK. Also. Like a real AK you can fire the Tokyo Marui AKM with the top cover removed. It isn’t practical in any way shape or form but it is immensely satisfying. One thing of note is the recoil spring is quite sluggish so the bolt does feel quite slow when you cock the gun and let it return to battery especially if it’s in any other position but horizontal. Any slightly positive angle and it can feel like it doesn’t have enough juice to make it all the way back. This doesn’t however have any detrimental effect on firing whatsoever and it puts out a realistic RoF of about 600 RPM. 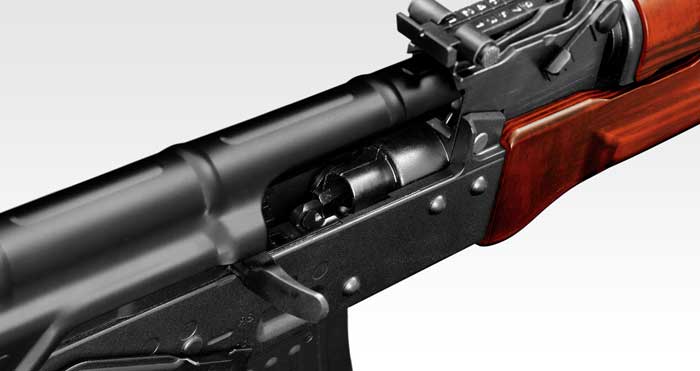 The flip side of this heavy bolt assembly is the recoil. Even on semi auto it kicks harder than any GBBR I’ve owned and on full auto it will send your shots off target I’d you don’t control it properly. The AKM also makes a lovely sound as it rattles through the rounds. It is very pleasing I have to say and certainly adds to the experience of using it.

FPS wise it was chucking out about 300 with ASG blaster 0.2g BB’s and Nuprol 2.0 gas which is about right for a Marui GBBR. As it gets colder I can imagine a switch to Nuprol 3.0 will be needed to keep it cycling consistently in the winter months.

To begin with the range was a little disappointing but after putting a few magazines through the gun it seems to have settled down but I do need to have the hop on almost fully to work with my preferred 0.28g BB’s. Speaking of hops; it seems to be the same style rubber as the MWS.

Unlike the MWS but like a real AK the bolt does not lock to the rear after the last BB but the gun does stop firing even if there is gas in the mag. I love this feature as once again it’s true to the real firearm. If for any reason you need to dry fire – say after changing some parts you can do so by moving a small switch in the magwell. A handy little feature and easy to activate/deactivate as required. 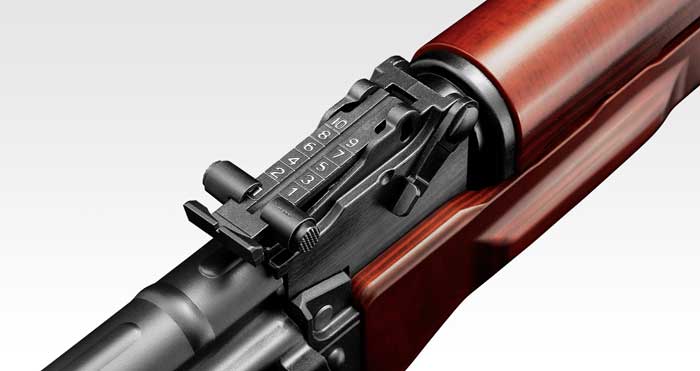 I have yet to use the AKM in more than a fleeting game and a lot of range time but so far I am extremely happy with it. Unlike all of my AR pattern guns this will be staying as is. I’m not even gonna put a scope on it and the only concession to modernity I’ve made is the addition of a ferro concepts slingster in plain brown.

I’m really looking forward to getting in some more play time with the Marui AKM and I’m thoroughly impressed with their first foray into GBBR AKs. This doesn’t mean I’m going to give up my AR’s any time soon but for a change of pace and something I don’t usually play with I’m glad I have it and I’m glad it’s Marui. Until the next piece: have fun and stay safe.

The AK47, which the former Soviet army formally adopted in 1949, was created to compete with the MKb42, the first semi-automatic assault rifle ever created by Germany. A prototype of the AK47 will be submitted to the trial to choose the next assault rifle in the Soviet style by Mikhail Kalashnikov, who is starting to make a name for himself as a gun designer.

This prototype, which had fewer pieces and a structure with lots of gaps, is alleged to have operated flawlessly even when squished by mud or dragged by a truck.
Tokyo Marui accurately set operating performance priorities in order to make sure that it fires in critical circumstances regardless of the climate or weather.

Due to its excellent reliability and resilience, the AK47, which was later formally adopted by the Soviet army, is adopted and licenced in every nation. The AK47 evolved alongside the AKM and AK74, and even after the fall of the Soviet Union, it developed into a contemporary design known in Russia as the AK100 series. It is now the most popular assault rifle in the world.

The latest Tokyo Marui replica of this legendary rifle is the AKM GBBR with improved durability and accurate reproduction of each component by exact reproduction of the genuine real steel AK and reproducibility of wood grain by use of a unique surface finish. The grain of wood is accurately represented on the resin hand guard and stock by using sophisticated printing techniques. It is also a model with a realistic operation style thanks to the installation of an auto stop, as well as a strong recoil and durability.

Equipped with a blowback engine made specifically for AK that has a big, 19 mm-diameter piston.  Additionally, the bolts work in tandem with the launch to give you an extremely powerful recoil shock.

Additionally, Tokyo Marui strive for the reproducibility of the appearance, including the receiver’s texture, the grip’s painted bakelite finish, and the receiver cover made of pressed steel.

With the aid of a special adjustment tool, the front site can be moved up, down, left, and right. Additionally, the slide bar’s location can be changed to raise the plate-shaped sight body and adjust the back sight up and down.

You can install a muzzle option with a 14mm reverse screw specification, such as a silencer if you remove the muzzle brake on the muzzle.