If you play airsoft then you have most definitely heard of the ubiquitous M4 and AK family of guns. They are possibly the most widely copied by every company that turns out airsoft guns as they just sell. This is true in real life as well as airsoft.

Over the years however, many real steel manufacturers of firearms have tried to make something a little different but not so widely removed from these staples that users will have difficulty transitioning from one to another as muscle memory is a huge part of training and difficult to unlearn so why not harness it?

That exactly what FN Herstal some years ago during a competition run by SOCOM to find a potential successor to the aforementioned M4. The result of this work was the scar platform, which featured a 5.56 and 7.62mm version – the Scar L and Scar H respectively. Both were available in CQC, standard and long barrel variants. Both featured significant functional commonality with each other as well as the legacy M4 platform.

This commonality meant that all of the common fire controls such as fire selector and magazine release were in the same places so any soldier who had fired an M4 could pick up a scar and with minimal familiarity training would be fully proficient in using the new weapon system. This offered huge benefits to both the military high command as well as the end user soldiers themselves. Whilst there were a lot of similarities there were also significant differences most noticeably in the way the scar rifles looked when place next to an M4.

The biggest and most noticeable difference that jumps out at you is the single piece upper receiver, which is made of aluminium and features a full-length rail along the top for mounting optics or other accessories (mission dependent of course). The lower is a full polymer construction, which is a big departure from the older designs but helps to keep the weight of the gun down without sacrificing strength. Next the charging handle was moved from the rear of the receiver to the side and could also be switched from left to right making the scar much more ambidextrous than an M4. All other controls were also fully ambidextrous as well.

Magazine compatibility with existing magazines in 5.56mm was an important design feature for the L and meant that the current inventory of magazines could be used. However for the scar H a new magazine was obviously required for the larger calibre rounds and a proprietary one is used holding 20 rounds.

Finally the action was short stroke piston driven and not direct impingement which was a big departure from the M4 and also meant that with the construction as it was a folding stock could be added. The now infamous UGG boot that is instantly recognisable and either loved or hated – as an aside; whilst I love the scar platform – I flipping hate that stock!

The Scar L didn’t remain in operational use for long but the H is still seeing active service in hotspots around the world.

That’s more than I’d usually comment on the real gun but I though it was worth covering before we moved on to the gun I’m looking at today, which is the Marui NGRS version of the Scar L CQC.

I have had my scar L CQC for quite awhile now and, as always, I purchased it from the guys at Defcon Airsoft who are my go to when I’m looking for a new Tokyo Marui airsoft gun.

As I said I really really do not like the stock the gun comes with and so before I even used it I swapped it out for Laylax M4 stock conversion kit allowing me to use one of the many many M4 stocks I have in my spares boxes. By doing this I also made battery storage much bigger as the standard storage space in the stock is quite small and at best will likely only fit a small 1100mAh battery in it.

With the battery in this gun happily spits out 0.28g BB’s at around 285fps, which sounds low but it still has range thanks to the amazing hoo that it employs. This is adjusted in the chamber by pulling back the charging handle and is a rotary design. 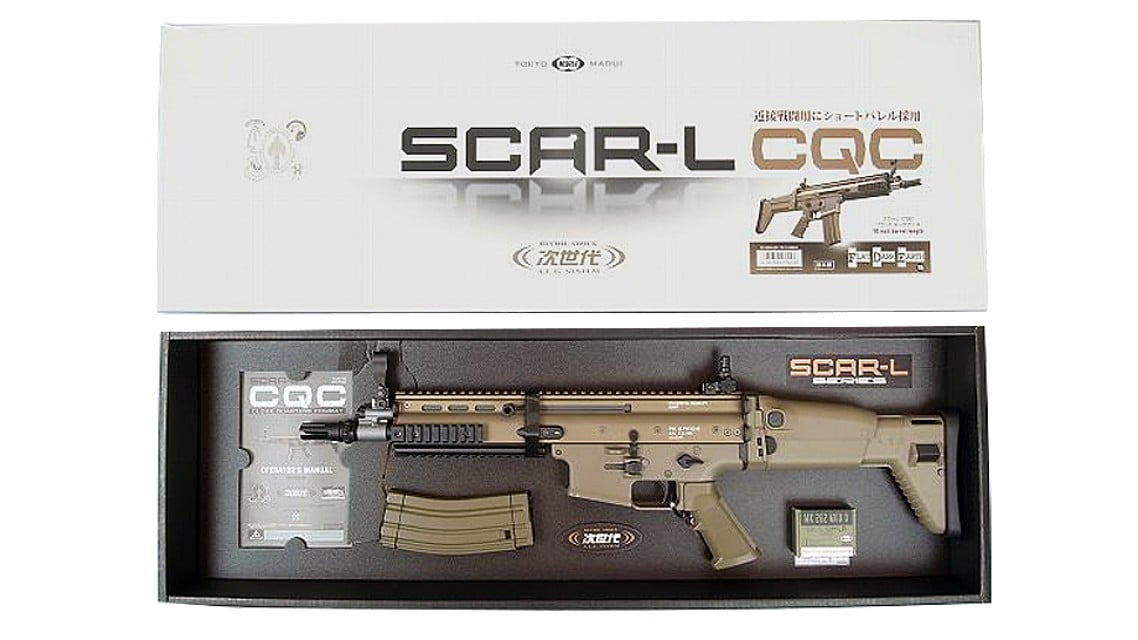 The recoil isn’t as strong as in the M4 family but is still satisfying and like with the real gun; that massive upper rail means you shouldn’t run out of real estate for accessories. It also makes accessing the inner barrel a bit more involved than on some platforms as you have to undo quite a few screws to get to the guns guts. Saying that; unless you are planning on upgrading it then there’s really no need until something requires attention. Even at the lower end of acceptable FPS velocities for the UK I have never once felt out gunned even in woodland games where the engagement ranges can be quite a bit further than you’d think. With a short dot scope on top it is more than capable of engaging players out past fifty metres and with enough punch that they should have no problem detecting the hit when the BB’s arrive.

Magazine wise you can run the standard metal Marui M4 NGRS specific magazines but I prefer the PTS EPM’s as they have a slightly higher capacity at 120 vs 82 and just look good.

One thing I do like; even though it adds complexity to the system is the reciprocating faux bolt but be careful not to catch your hand (or in my case; sling!) on the protruding charging handle. All I had to do was relocate my forward sling Mount and problem solved. I think it also gives the gun a distinctive sound as it clacks back and forth; especially in short full auto bursts.

Whilst scar’s aren’t perhaps as customisable as some other guns, cough, M4 it does have a strong aftermarket parts selection including some beautifully done and fully licensed pieces from PTS if that is something you wish to look at but I kinda like it’s differences but also it’s similarities to the M4 platform I’ve used for years. In fact, it’s the perfect “M4” for someone who doesn’t want an M