As is the way with Marui; they tend to announce things and then we end up forgetting all about them until the release actually comes round. Not so with the Tokyo Marui V10 airsoft pistol for me. I am not a 1911 fan so for me to like one, as I do with the V10, it had to be different.

The V10 isn’t a new pistol and in the real world its been around for at least 20 years if not longer. It’s also been out in airsoft form for a few years too and it has always struck me as an odd choice for them to make as it isn’t used by any military force and it doesn’t feature in any new films but as I like it I’m prepared to let it go!

First impressions were very good with it looking great in its box with the contrast between the highly polished sides and the sand blasted effect on the top and curved surfaces. The porting on the slide is nicely done too as are the 10 ports in the black cone shaped barrel which attaches to a nicely done chrome effect breach/chamber. The markings are crisp and replicate to some degree the real gun but the medallions on the pistol grips say Tokyo Marui – the gun doesn’t suffer for that though. Take down is like a cross between a standard 1911 and one with a guide rod but easy enough to do if you’ve ever handle either type of airsoft 1911 in the past. Even if you haven’t it’s actually quite intuitive and easy to do. 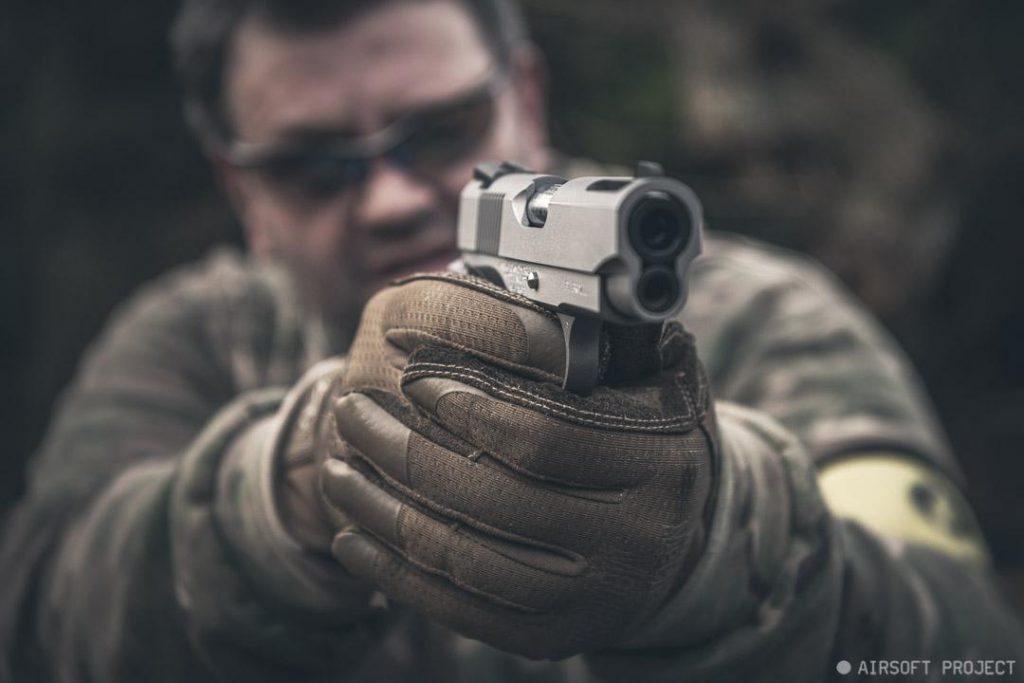 So, how did it hold up after using it?

I’d say it was a game of two halves if I’m being brutally honest. It is a great little pistol to shoot and accurate too out to about 20-25m with a nice snappy recoil using Nuprol 2.0 green gas and devil blaster 0.28g BB’s. FPS was 220 +/- 2 with said BB’s. It’s very comfy in the hand thanks to the moulded grips and it’s overall size is comparable to a G19. The contrasting finish from the flat sides to the textured curved surfaces is very appealing and looks fantastic to me and a few others who were quite impressed by it. The sights are Novak ones but don’t have any paint on so in low light acquisition is a challenge. I shall rectify that with some white paint ASAP however. If RMR’s are your cup of tea then the V10 is optic ready and comes with a mounting plate for the Marui version ONLY. it will not work with aftermarket replica RMR options but I have a couple I’m going to try that have a specific 1911 plate included so stay tuned. Unlike newer Tokyo Marui releases the slide needs to be removed to adjust the hop unit but it is easy enough to do and had no problem with 0.28g BB’s. 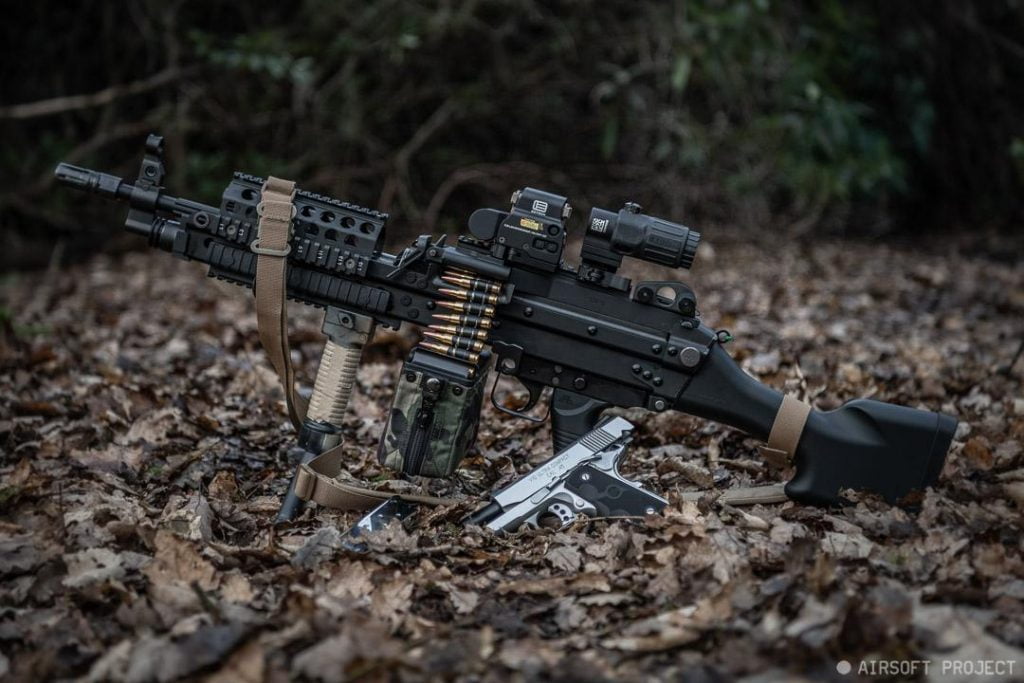 The stiff slide release wasn’t actually as bad as I thought it would be. It just took a little getting used to and a slight adaptation to my manipulation of it. It’s probably partly down to my usual handgun being a glock and the fact I haven’t used a 1911 for quite a while. I certainly wouldn’t let it put me off if I were looking to buy the V10. The mags hold 22 BB’s. If you think you’re gonna get 22 off presently with the temp sub 10degs then you’re dreaming unless you leave ooooh I dunno, maybe 30secs between each shot. If you want anything useable then you’re either going to have to under load the mag or accept that the last few won’t be fired. I found 16 was the absolute max during that winter and still have enough punch to lock the slide back and not lose power with the last few shots. Now it is warmer it does perform better but I would advise against using anything stronger than green gas in it to try to overcome these gas/capacity issues as you will over stress the pistol.

So there we have it. A nice little pistol. It’s nothing new new really as the V10 has been out for years by other manufacturers but it is a very well executed replica of a little seen 1911 variant. It isn’t without small issues (common to most 1911’s when the temp is low though) but I’m glad I got it as a change to the more modern mainstream handguns I have been using for the best part of the last 4-5 years. 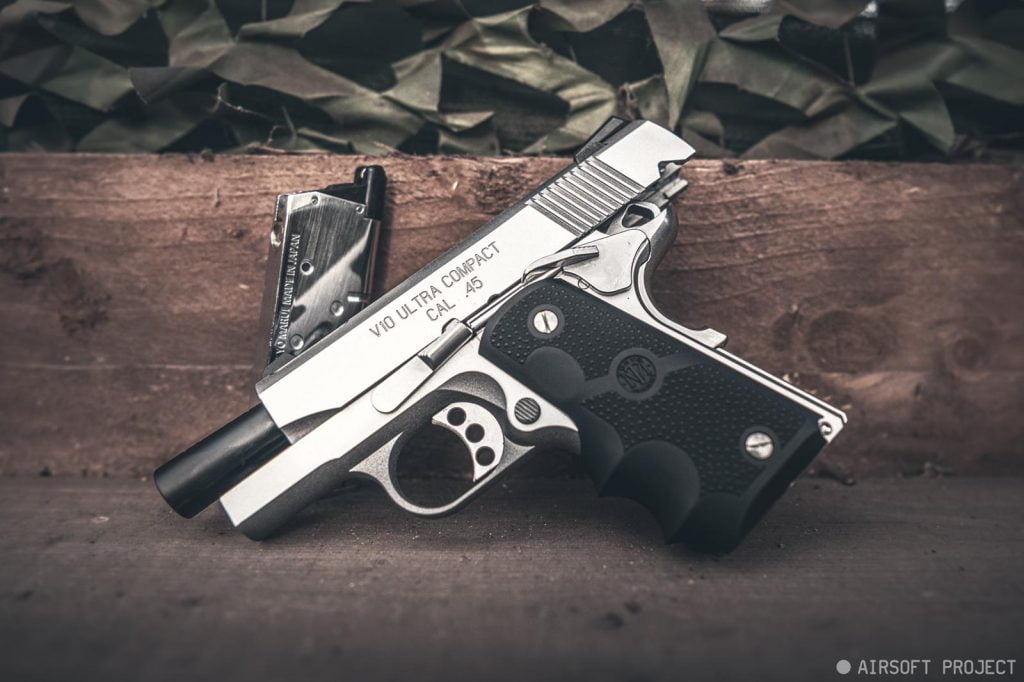 Photos are from the rather excellent Airsoft Project – a good friend and an amazing photographer of all things airsoft!!